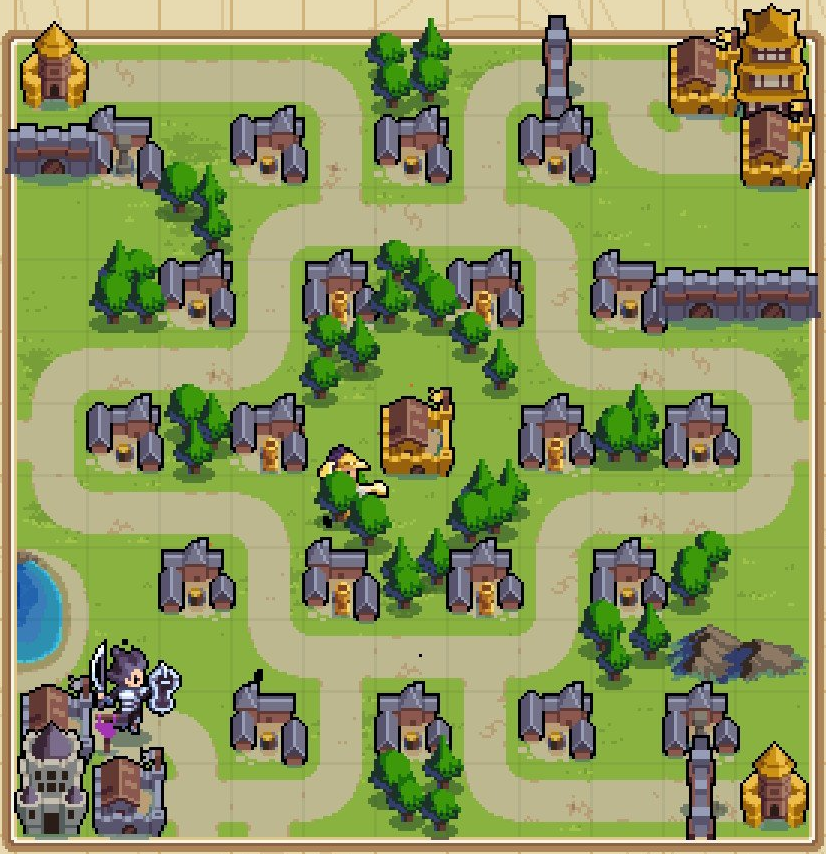 TinyGroove is a custom-made single-player campaign developed by 'Derek' for the turn-based strategy game, WarGroove, published by Chucklefish. The massive, (yet... tiny) 29-Map Campaign won the publisher's Community Choice Award with the most votes in the community's sub-reddit in August 2019. TinyGroove has a relatively dark story line wherein the player assumes the role of Dark Mercia in an alternate bleak version of Aurania. At the outset, Dark Mercia has been grievously injured but is ultimately saved by her finding and relying on Requiem, an enchanted artefact that the original WarGroove Campaign centered around. In this universe, this reliance comes with the unfortunate side effect of claustrophobia, which is frequently referenced as 'the darkness' in the game.

To represent this, Fog of War is in effect for every map, and as the player accumulates enchanted 'darkness-abating' artefacts in this version of Aurania, subsequent maps increase in size. This smaller average map size invites new strategic approaches and makes it convenient for gamers with limited play time to play through the Campaign with less frustration if they lose the map. This is also important for replay value, as TinyGroove contains many decisions, achievements, and artefacts that can require each mission to be replayed to complete them all if they weren't collected during their initial play-through for a particular mission. For example, collecting achievements can ultimately boost the performance of certain units across missions over time, while amassing artefacts can cause unique events to occur in the campaign, or even allow the player to control things like the weather, which secondary commanders they can use in battle, or the influences of nature and other commander's groove's on their units.

Ultimately, TinyGroove's massive campaign took Derek over 450 hours to build on the Nintendo Switch since February 2019 - September 2019, and contains:

...all of which are tracked automatically for the player in the Game's Achievement Castle. Campaign completion provides unique benefits for the player and even unit upgrades as they complete the game's challenging achievements, and collect darkness-disbanding relics that expand the player's world in TinyGroove!

TinyGroove's Campaign is divided into 6 Chapters (+ Prologue and Epilogue), each of which were released incrementally each month. Versions 3, 5, and 6 can currently still be found by browsing WarGroove's Custom Map Gallery, and Version 5 of TinyGroove was featured by Chucklefish in their 8th Community Spotlight in June 2019, and Version 7 won their Community Choice Award in August 2019. Information regarding changes implemented for each major release version are available in the Change Log at TinyGroove's Wiki at: https://tinygroove.fandom.com